Tom Kurtz, President and CEO of Chan Soon-Shiong Institute of Molecular Medicine at Windber (CSSIMMW) is delighted to announce that Chief Scientific Officer Dr. Hai Hu is among those who were recognized with the 2020 American Association for Cancer Research (AACR) Team Science Awards at the association’s Virtual Annual Meeting II this week. The AACR recognized the founding members and the current project team associated with The Cancer Genome Atlas Project (TCGA) for their extensive collaborations and ongoing efforts to generate one of the largest ever sets of tumor characterization data.

The Cancer Genome Atlas Project began in 2006 with collaboration with the National Cancer Institute (NCI) and the National Human Genome Research Institute to create a detailed catalog of genomic changes associated with specific types of cancer. The Cancer Genome Atlas (TCGA) has helped establish the importance of cancer genomics, transformed understanding of cancer, and even begun to change how the disease is prevented, diagnosis, and treated.

The AACR Team Science Award has been established by AACR and Eli Lilly and Co. It acknowledges and catalyzes the growing importance of interdisciplinary teams to the understanding of cancer and/or the translation of research discoveries into clinical cancer applications. 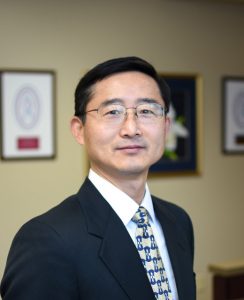 “I am honored to be recognized as one of the selected awardees from TCGA for the 2020 AACR Team Science Award,” said Hai Hu, PhD. “We became part of the TCGA first as a tissue source site for the breast cancer study, for which the Clinical Breast Care Project (CBCP) contributed 10% of the samples exclaimed of the highest quality. At the same time we participated in data analysis
and emerged as the leader for TCGA clinical data analysis, published important papers in top journals, and ultimately developed the TCGA Clinical Data Resource published in Cell.

The AACR congratulated all of the researchers whose vision and involvement in TCGA have contributed significantly to advances in cancer research and patient care. For the full list of 2020 AACR Team Science Award recipients, click here.